Los Angeles-based developer The Ratkovich Company (TRC) and San Pedro-based Jerico Development, Inc. (Jerico) have unveiled new renderings, timeline, and updates for the San Pedro Public Market (SPPM) on the LA Waterfront. The plans showcase a world-class, urban waterfront destination for locals and tourists that re-energizes and connects downtown San Pedro and the surrounding local community to its waterfront. The updates were revealed to the public at a Town Hall meeting hosted by the Port of Los Angeles on March 20 at the Warner Grand Theatre in San Pedro.

SPPM is envisioned to become an environmentally sensitive and sustainable urban environment––a vibrant, family-friendly shopping, dining, entertainment and recreational themed destination that will bring jobs, renewed economic vitality, and business opportunities to San Pedro and the LA Waterfront. The design aims to embrace and build upon San Pedro’s colorful history and proud traditions, drawing from the existing authentic character and heritage of the San Pedro community and the LA Waterfront as a working waterfront.

Wayne Ratkovich, known for his innovative approach to urban development says, “Our mission is to produce an economically sustaining development that improves the quality of life for the Los Angeles Waterfront communities.”

The design team is led by Rapt Studio and includes internationally recognized firm James Corner Field Operations (“Field Operations”) and Adamson Associates as Executive Architect. Field Operations led the design and construction of the High Line, the twenty-three city-block long elevated railway reclaimed as an extraordinary public space in the heart of Manhattan’s West Side. Rapt Studio, architecture & design, is renowned for devising compelling spaces for clients such as Dropbox, HBO, LinkedIn, The Honest Company, Adobe Systems, and The North Face. David Galullo, CEO and chief creative officer with Rapt Studio says, “Our concept is to create a genuine sense of place and a one-of-a-kind experience for SPPM visitors and retailers alike. In celebrating the rich, real-time theater of the working Port of Los Angeles and the diverse population and cultural fabric of the San Pedro region, we set out to design a series of architectural moments that were simple and powerful. The design plays off of the landscape and is reminiscent of the fishing sheds that may have once peppered the waterfront all the while, being a modern expression of civic gathering and a new kind of retail/dining/entertainment space. SPPM has been thoughtfully designed to weave together an array of curated shopping, dining, and entertainment venues with playful and purposeful landscape elements to fuel a perfect date night, a mid-morning produce run, or a full day of family activity. This is not just another mall on the water.”

“We are thrilled to be a part of the San Pedro Public Market project––the exciting next step in the Port’s reintroduction into San Pedro’s civic identity and a true extension of the city onto its waterfront,” says Richard Kennedy, senior principal, James Corner Field Operations. “We have reimagined the nearly three-quarter mile waterfront as a vibrant collection of markets, shops, restaurants, plazas, promenades, play spaces and social destinations that exemplify the vitality of San Pedro life and culture.” The development team is a joint venture collaboration between The Ratkovich Company and Jerico Development, Inc. In 2016 the Board of Harbor Commissioners’ awarded a 50-year master ground lease to the San Pedro Public Market LLC (“SPPM”) for the Ports O’ Call site.

The SPPM development includes the site’s park space, parking improvements and buildings, and will sublease portions of the site to individual retail, dining and entertainment tenants.

The Port of Los Angeles and the local San Pedro Community conducted a decade’s long process of engagement and dialog, reimagining the commercial and visitor serving Port properties adjacent to the community of San Pedro.  The master plan developed through this collaborative effort was memorialized in the 2009 San Pedro Waterfront Environmental Impact Statement (EIR). The EIR and master ground lease calls for the Port to construct a 30’ wide continuous waterfront Promenade on the site, necessitating the Port’s demolition of all existing waterfront buildings as well as allowing it to conduct other clean up and site improvements necessary to make the site ready for commercial redevelopment. In addition to the Promenade,  the Port will also construct significant additional infrastructure improvements including the Harbor Blvd. realignment and traffic improvements; the Town Square plaza at the foot of 6th Street connecting the redeveloped waterfront to the historic Downtown San Pedro; structural waterside improvements including constructing a large visitor boat dock and providing upgraded electrical service to the site. 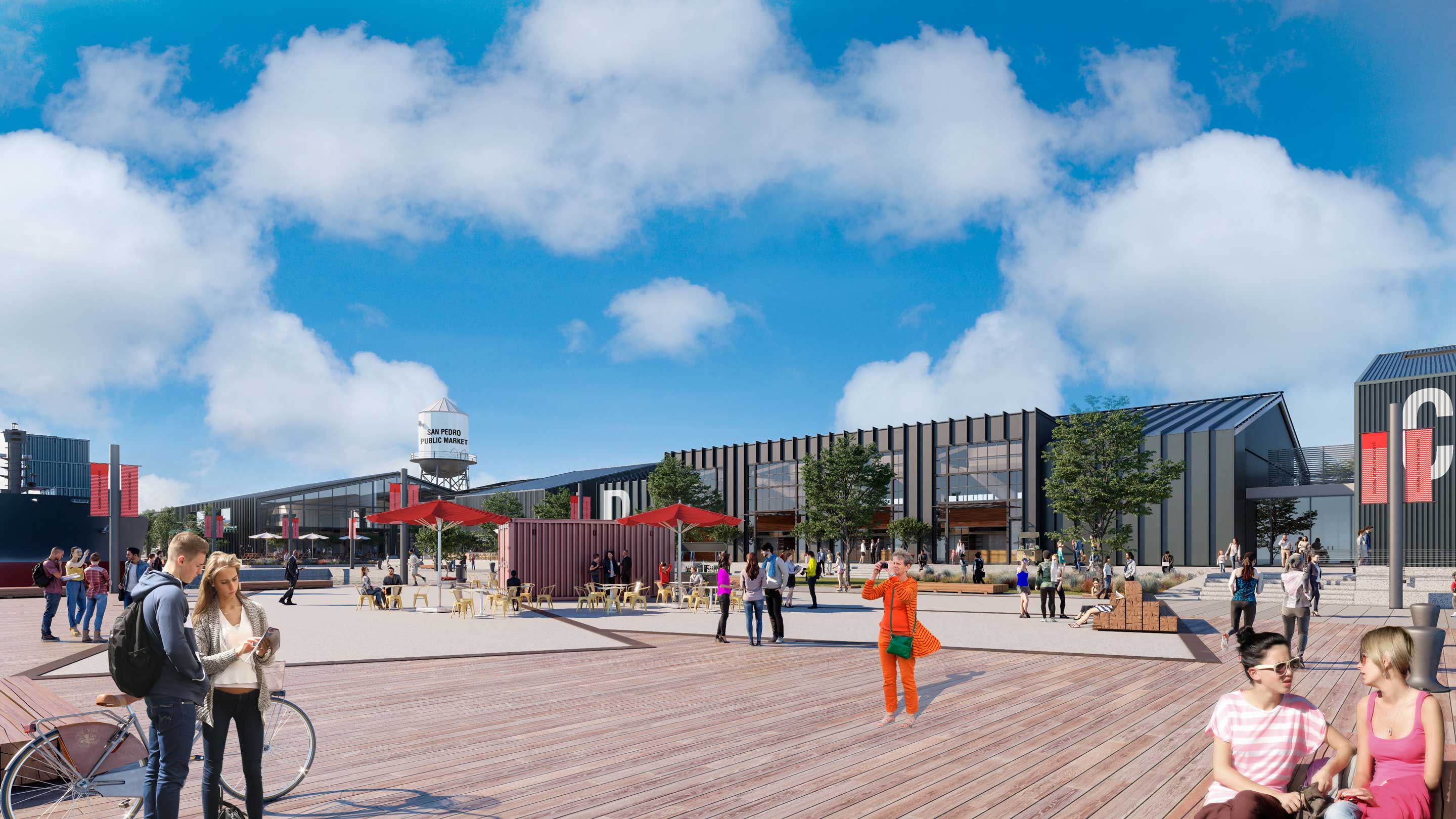 The work will be done in phases, with SPPM’s development being closely coordinated with the Port’s work. This phased approach will allow the San Pedro Fish Market, Café International, Crusty Crab, Spirit Cruises, and Harbor Breeze Cruises to remain in operation during construction. San Pedro Public Market is scheduled to open late 2020 or beginning of 2021.

Best of the South Bay